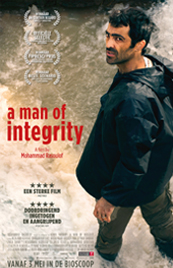 Winner of the Un Certain Regard prize at Cannes, A Man of Integrity tells the story of Reza, a former academic expelled from his college for protesting against bad working conditions at a local factory. He leaves Tehran for a remote village to become a goldfish farmer. But the problems of systemic corruption seem to follow when it is revealed that a shadowy organization in control decides it wants the farm's land for itself. The more Reza resists, the worse his troubles seem to get. In his determination to hold on to his principles, he risks losing everything else.