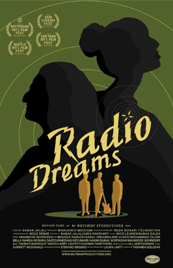 This event will follow a screening of an animated SHORT-FILM called MR DEER!
It did the Festival in 2018 and became one of the hightlights. Now UKIFF is also proud to present Mr Deer!

"Mr. Deer’ is a 20-minute stop motion animation which utilizes the puppet technique to narrate a story set in an unknown time, in a ruined subway station which is similar to those in modern European societies. People in this society have animal faces and have forgotten humanity."

A brilliant and misunderstood Iranian writer struggles to pursue his ambitious goal of bringing together Metallica and Kabul Dreams, Afghanistan’s first rock band, at a satellite radio station in San Francisco. This painstakingly designed, dryly comic drama by Babak Jalali is a reflection on immigrant life, as well as a loving ode to those who believe that music can change the world. Starring Mohsen Namjoo, Radio Dreams is an electrifying representation of the music industry in the Middle East!